My heart — that mean-spirited little pump I keep around for “Casablanca” and odd emotional assignments — hurts for the Midwest folks who have been wiped out by flooding, once again.

Three to four million acres were under water. About 2 million acres will not be planted. Twenty-four lives have been lost; property in the billions has been damaged or destroyed.

The full economic impact will come into focus several years from now when all the damage, lost wages and lost sales are tallied against the money coming in from disaster aid and dollars spent rebuilding.

In 1993, Midwest flood damage came to $23 billion. It’s tough getting kicked in the teeth again and again.

My little valley below Snowy Mountain has cleaned up after three 100-year floods during the last 25 years. In the upper Potomac River watershed, we, too, have lost lives and homes.

I know what it is to wade through belt-deep, flowing water at 3 am on a moonless November night during a lightning storm with a rope tied to a fence post to get two 60-year-old trapped neighbors up to dry ground.

I like the stubbornness and the courage of people who rise from the floor. But I’ve stopped liking the idea of putting things back as they were in exactly the same vulnerable…stupid…place.

I started feeling this way as I watched people in the counties around mine rebuild in their floodplains. Then I listened to the gutsy “We’ll-be-back promises” from New Orleans—a city below sea level, now guarded by rebuilt levees that will predictably fail as sure as wind blows and water rises.

Some blame global warming for abnormally heavy rainfall; others don’t.

Some argue that our own activities — eliminating water-absorbing wetlands, channeling rivers, reducing the absorptive capacity of cropland by installing drainage tiles, reducing forestland buffers — contribute to flooding’s severity and destructiveness.

My point is different. While we can’t prevent big rains and flooding, we can minimize the damage.

We can certainly do more traditional flood-control of the type we’ve been doing—digging deeper channels, building higher and better levees, rebuilding in the same place with insurance money. While this approach is familiar, it concedes that most levees will break or be breached eventually.

Here’s a damage-control alternative that might be cheaper and work better: Let it flood where we want, not where it wants.

Instead of trying to keep flooding within narrow river channels, let some of it spread over designated release areas in floodplains.

These acres, for the most part, are now in private hands, used primarily as cropland with farmhouses and agricultural structures.

Some designated flood areas would be returned to permanent wetlands; the rest would be rented for agricultural use, thus repaying the buy-out program over time.

Floodwaters would release themselves (where levees are lower) onto dedicated floodplain all along the river system. Spreading the flood, which is what happens anyway when levees fail, reduces its speed and power. Spread rivers in flood don’t crest as high as channeled rivers. Spreading would protect river-front cities and towns.

The way it works now, each levee that breaks allows flood water to spread willy-nilly, ruining buildings and farmland. By establishing release zones all along the waterway, flood impacts could be controlled and property damage minimized.

Residents would assume all risk of occupancy and structures in release zones. Federal flood-insurance would not be available. Private dykes could be built around buildings, but the land would be open to floodwaters.

Public policy would tilt toward encouraging people to move but continuing to use much of the land for agriculture.

If floodplain residents insist on staying in a release zone, they would forfeit assistance relief and subsidized insurance that now encourages them to do so.

If the government bought 4 million acres along the Mississippi River system for release zones at $3,000 per acre, the total cost would be $12 billion. Double that to cover buildings, and you get $24 billion, which is $1 billion less than the cost of the 1993 flood.

Floodplain buyout programs now operate in many states, but on a very small scale. Structures are bought and demolished in floodways, the most dangerous part of the floodplain. Open space and wetlands remain. Funding comes from local, state and federal sources, such as the USDA’s Natural Resources Conservation Service and through HUD’s  Community Development Block Grant program.

Many will oppose this idea. People don’t like to change or move; I’m one of them.

But doing what we’re doing succeeds only when flooding cooperates. Building levees that will fail only increases the eventual costs of these failures. Rebuilding levees in New Orleans to pre-Katrina standards won’t protect the city from the next Katrina.

Rather than stand futilely against the flood, might we do better escorting it to areas of our choosing? Could that save us money and spare our hearts? 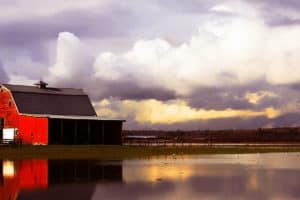 Property Buyers: Putting the “Do” in Due Diligence Tips for Buying an Old Farmhouse