Hemp products have seen a boom since the 2018 Farm Bill was signed into law, which legalized hemp on a federal level and the ability to sell products commercially.

Hemp, not to be confused with marijuana, is part of the Cannabis plant family. Cannabis contains a variety of different compounds called Cannabinoids, two of the most dominant are Tetrahydrocannabinol (THC) and Cannabidiol (CBD). Both Cannabinoids have shown to provide profound benefits to the human body; however, THC induces psychoactive effects (gets the user “high”), while CBD does not contain any psychoactive properties. Because of this, hemp actually refers to the industrial, non-drug variant that is cultivated for its fiber, hurd, and seeds.

Hemp is a plant with versatility, especially its fiber, which is used mainly in clothing, construction materials, paper, and many more products. China is the world’s biggest producer of hemp stalks, with a domestic industry valued at over $200M.

Though the boom in the U.S. due to easing of laws is recent, the plant’s importance isn’t new. Hemp arrived in Colonial America with the Puritans in the form of seed for planting, and as fiber in the lines, sails, and caulking of the first ships brought to America. The crop became especially important in New England, Maryland, and Virginia during the years leading up to the Revolutionary War. In fact, the first drafts of the Declaration of Independence were penned on hemp paper. A 1938 Popular Mechanics article discussed claims of 25,000 industrial uses for hemp alone.

The National Hemp Association reports hemp has the strongest and longest plant fiber in the world, resistant to rot and abrasion. In today’s society, hemp fiber can be found in bags, nets, shoes, canvas, and even carpet.

The medicinal use of CBD oil has risen, due to experts endorsing its health benefits. Derivatives of CBD have been used to treat different pains and anxiety. CBD oil is being held in high regard, but there are still studies being conducted to see what else the product can do for a person’s health. Experts believe there is still much to learn about the plant.

Another component of the hemp vertical are CBD processing facilities. There simply aren’t enough of these facilities around the country to meet the demand for this versatile product.

Hemp is a crop that is fairly easy to grow. Compared to cotton, corn, and soybeans, it requires little water and takes root in any grade of soil. This plant has a deep, soil-aerating root system, and grows tightly-spaced, crowding out weeds.

Nineteen states currently allow hemp cultivation, ranging from Hawaii, to Nevada, and of course Colorado. Over 25,000 acres were planted nationwide in 2017, with Colorado accounting for 9,000 of them.

As for 2018, it may be no surprise that Colorado remained the top hemp producer with 12,042 outdoor acres and 2.35 million square feet indoors growing the plant. Kentucky was a close second with 12,800 registered acres, as the crop is in high interest from former tobacco producers. Oregon (3,500 acres) and North Dakota (3,100 acres) were the next states with high growth rates.

The economic impact of hemp has been increasing at a steady rate. Estimates from Vote Hemp show the total retail value of hemp products in the U.S. in 2017 was $820 million. The Congressional Research Service states that hemp imports to the U.S., consisting of hemp seeds and fibers, totaled $67.3 million in 2017.

As U.S. farmers begin to grow more hemp, there will be much room for investments into the asset. Driven by explosive growth in hemp-based consumer products, the global hemp market is expected to jump to $10.6 billion by 2025. 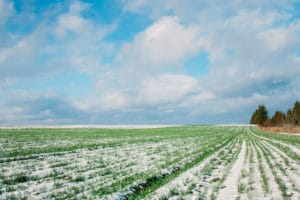