Where the balance is finally struck rarely satisfies everyone. But solutions where each party gains a little more than each loses are increasingly possible. Deals of this sort require flexibility, creativity and a willingness to negotiate.

The amount of agricultural land — crop land and pasture — is declining in the U.S., mainly because population growth targets it for residential and commercial development. Most of the pressure on open, agricultural space spreads out from metropolitan areas and towns. Agricultural land is also used for second homes and a variety of commercial, public and non-profit projects. Building on what is considered “open” agricultural land is usually cheaper and easier than building on land already built on, which is why development is drawn to such parcels.

The idea of preserving privately owned agricultural land amid commercial and residential development emerged in the 60s and 70s as a response to the increasingly familiar pattern of sprawl and commercial strips. Both sticks and carrots were used to effect a public use of private property. Comprehensive plans and zoning restricted development and directed certain uses over others. Federal and state legislation offered substantial tax benefits to landowners who donated some or all of their development rights to preserve agricultural uses and open space.

Oregon was a battleground for many of these conflicts, beginning in the 70s when Senate Bill 100 set up a state land-use-planning policy and agency (Department of Land Conservation and Development, DLCD) that delegated implementation of DLCD state-wide guidelines to local jurisdictions. Land-use planning was more popular in the Portland-Eugene corridor than in the state’s rural areas. During the last 15 years, the system has been challenged with referenda and court cases, sometimes successfully, sometimes not.

One key issue has been whether private landowners should be fairly compensated by public money when land-use restrictions devalue their property. As it stands, if Oregonian governments — state or local — want to restrict development on private property, they must either pay the landowner for the reduction in value or forego restrictions. As a matter of practice, public agencies can’t pay, so restrictions are now dropped.

A balance is wanting here in my opinion. The no-pay philosophy was out of whack, and the no-restrictions antithesis is too. More than $15 billion claims for compensation have been filed, and none paid as far as I know.

The Wall Street Journal ran a piece on April 2nd, “Oregon Pear Growers Sour on Land Law,” by Joel Millman, that examined the predicament of pear farmers in the Rogue River Valley near Medford. Pear farming has declined, both in terms of the number of farms and acreage. Three companies now account for about 90 percent of the Valley’s production.

Their problem is that they want to move their orchards to more rural areas but can’t sell their close-in land for market value because land-use regs require that it be kept in agriculture. No one, it appears, wants to pay $10,000/A for this perpetual agricultural land, and the owners aren’t allowed to sell it for its HBU value — $100,000/A — which would give them the money to move their operations farther out. The seller doesn’t want to sell for what he’s allowed to sell it for, and no buyers are allowed to buy it for what it’s worth.

1000 Friends of Oregon, a long-standing land-use and conservation organization, opposes loosening restrictions on agricultural land sales. They and other opponents of revising the system argue that HBU sales would shift the costs of development to citizens, and more land going into development would reduce land available for farmers to buy, thus raising its price.

The land-use controversy in Oregon has a long history and has solidified both sides. I don’t claim to speak with authority on its many related issues.

Still, I don’t like public takings of private property, though I admit that some circumstances exist where the general good outweighs the individual property right. I remember that one good friend was so angry at having her small apartment building confiscated for a small city parking lot that she refused to pick up the $300,000 check, which sat in escrow for many years until her death. Taking is a public power that’s easily abused.

Confiscating a use right without fair compensation — which seems to be what’s going on in effect with these pear producers — narrows the cost of environmental protection that benefits everyone to just these landowners.

If the public wants to preserve open land, then public dollars of one sort or another should pay for it.  Bonds pay for schools, bonds can pay for open space. Tax credits can be offered directly to the landowners, or purchase money can be raised through their sale to other parties. An off-set system could be set up that would allow development of some of this disputed land in return for the purchase and preservation of other land in the community as open space.

I’m much more in tune with preserving open space as parks — ranging from developed recreation to leave-it-be space — in cities and towns than keeping it in agriculture. I think the public benefits more from open space with many uses than it does with private land locked into one use that excludes most public benefits. Urban community gardens are a great way to keep city space open and green, but that’s a different set of issues than the pear controversy.

I understand why environmental-protection laws are set up with few, if any, exceptions. But they inevitably produce cases like this one where a better balanced outcome seems out of reach. 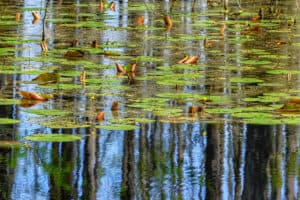 Goldman Sachs: Why is the SEC trying to pin a tail on this donkey?
Are you Bored? Buy Rural Land.
Comment